The next monthly walk will be at 9am on Sunday, 6th November, led by Maja Skrlj

The Australian Labyrinth Network is offering a two hour seminar at Ronald McDonald House in Sydney on Friday 25th November, for those interested in discovering how labyrinths can enhance well-being in both a personal and community sense, and particularly in terms of young people’s mental health. It would be of interest to health professionals, carers, teachers, meditators or anyone seeking to deepen their understanding of the labyrinth. Penny Jones, Susanne Jones and Margaret Rainbird will share their experiences of labyrinths in communities, with young people and a moving personal journey. You will also get the chance to walk the beautiful labyrinth nearby at Westmead Hospital.

The Labyrinths and Wellbeing Seminar 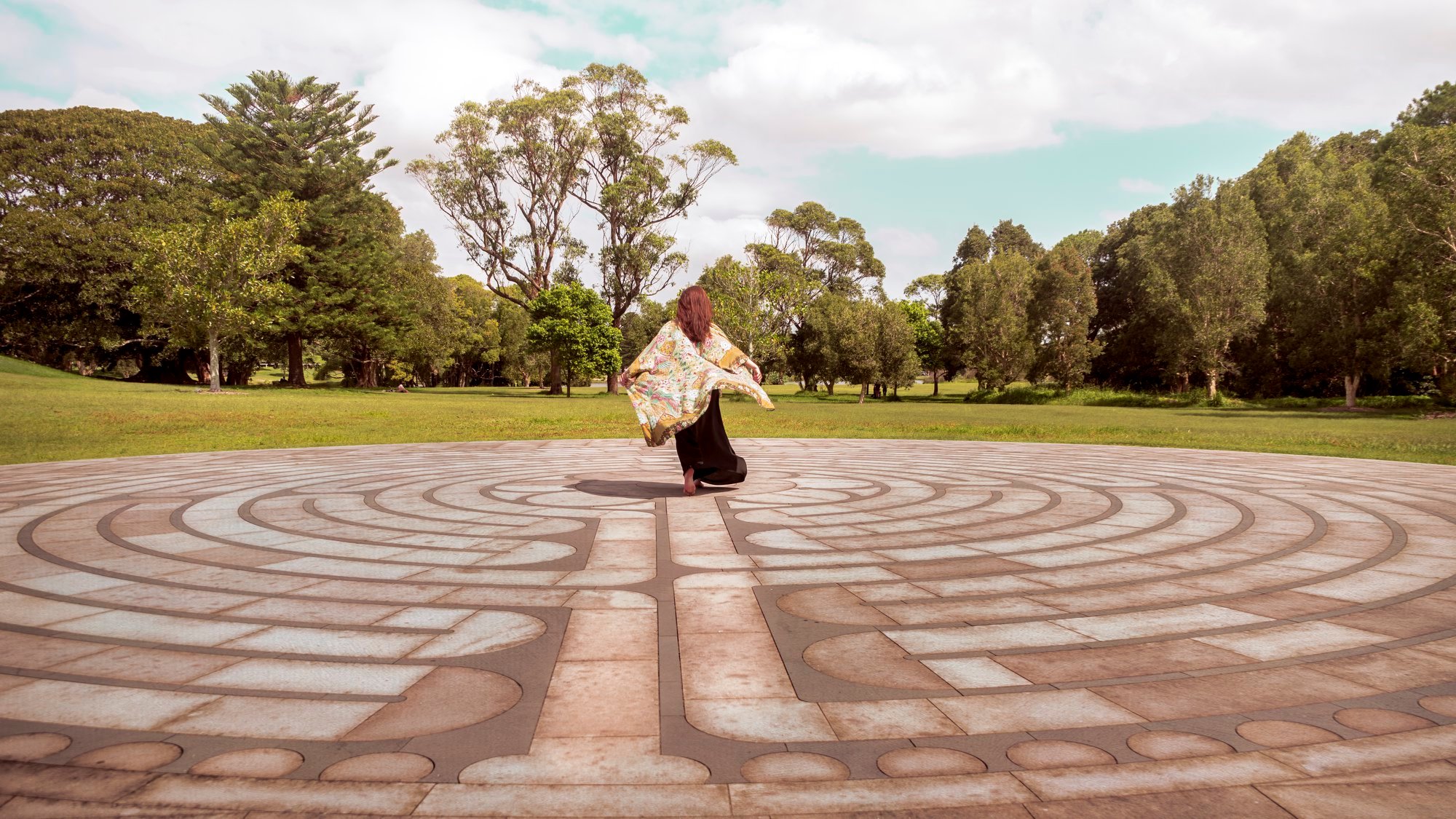 May you be well and happy.
May you walk in peace
and know yourself
to be beloved on the earth,
held and blessed by all that is. 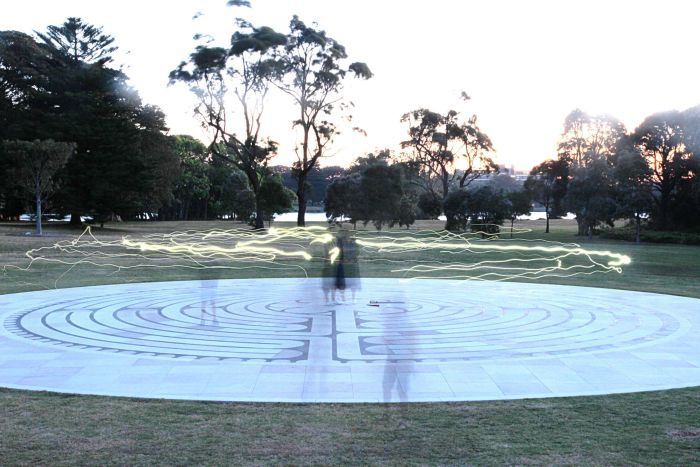 Let the heartsick, let the empty,
let the searching come. Let the hopeless,
let the blissful, let the forsaken come.

When the days unspool on dark reel after
another, come. When sorrow haunts
the corners of the house, when the hours stack
like dirty plates, when solitude
becomes loneliness, come to the labyrinth. END_OF_DOCUMENT_TOKEN_TO_BE_REPLACED

Dr John James, architect, historian and psychotherapist specialized in narcissism talks about labyrinths. He is a world expert on the Chartres Cathedral and its labyrinth and helped us get the geometry right for the Centennial Park Labyrinth.  In this interview he offers some fascinating insights on astrology and the labyrinth. You can read an in depth article written by John in 1972 on the labyrinth in the Chartres Cathedral here: 36 labyrinth.  To find out more about this remarkable man go to http://www.johnjames.com.au/

You can see the full 30 minute interview here.

The Centennial Parklands Foundation held a ‘Sod-Turning’ ceremony on Wednesday 5th February to mark the start of construction of the sandstone labyrinth. Emily Simpson spoke of the journey so far.

Centennial Park has put the privately funded sandstone Labyrinth at the forefront of their plans to revitalise the parklands, the Sydney Morning Herald reports… 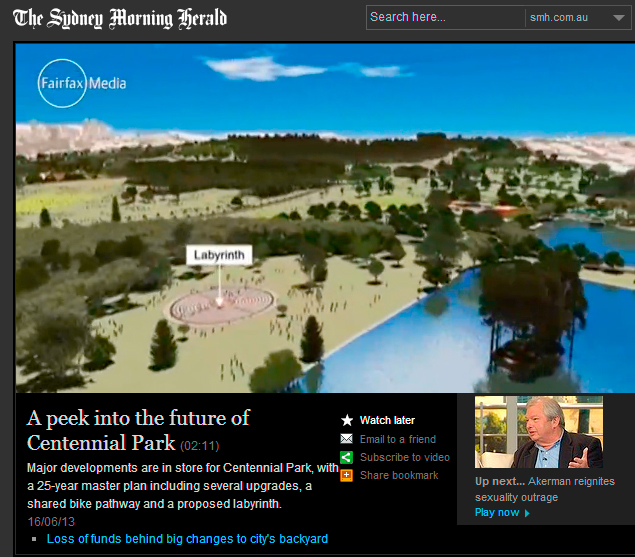 Things are going well with preparations for the construction of Australia’s first sandstone labyrinth and it looks like it will be completed early next year. This is a surprisingly complex thing to build – with over 1500 individual pieces of stone, every detail needs to be perfectly aligned for it to work.  The good people at Centennial Parklands are ensuring that it will be on a par with the other significant stone labyrinths in the world – the one at the Chartres Cathedral in France and the one at the Grace Cathedral in San Francisco. In the meantime, before construction actually begins, there will still be a labyrinth painted onto the field for you to walk. 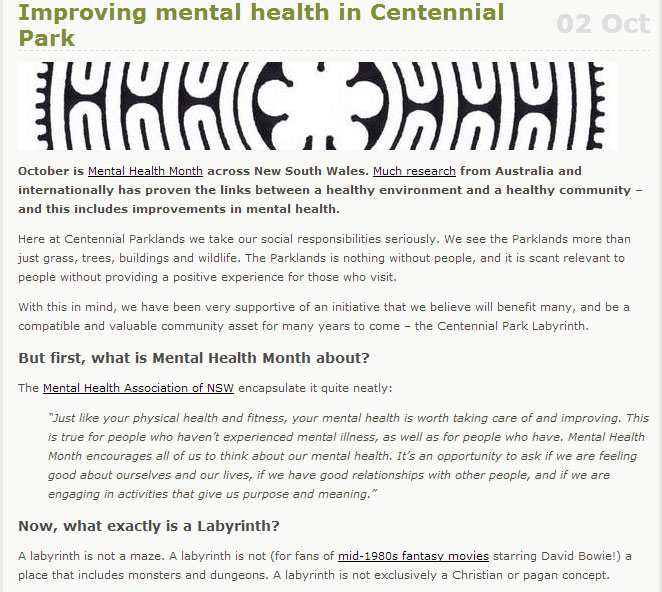 Read the full story and see the pictures here…

Emily Simpson explains the background for the labyrinth in Centennial Park

I first walked a labyrinth in May 2009 at the Grace Cathedral in San Francisco. Like many who have never experienced one before, I had assumed it would be like a maze, so I was pleasantly surprised when I saw its simple beauty and actually walked it…and walked it…again and again and came back the next day to walk it some more, slower and slower. I felt reeled in by its mystery, held by the structure of its winding path and liberated by the stillness at its heart. I fell in love with the labyrinth and the whole idea of walking meditation.

I’d been in a sort of emotional cocoon for sometime after a series of sudden leavings and endings and many of my definitions of self had simply fallen away. It wasn’t until I walked the labyrinth that I felt the possibility of a light at the end of the tunnel. Somehow the rhythm of its path gave me back a spiritual pulse. I felt held by the structure of its winding path and received by the mystery at its heart.

I hadn’t felt this lit up about anything for years and read every book I could find on the subject. Realising that there were no public labyrinths in Sydney, I created a proposal for the Board of Trustees of Centennial Park to inspire them to build one. Providing public spaces for contemplation is more important now than ever before. We need a new paradigm for non-denominational sacred space and opportunities to centre, calm and remember ourselves.

On the first day of Spring last year, my proposal to build a sandstone labyrinth in Centennial Park was approved by the Centennial Parkland Trustees. We now begin the journey of gathering the $500,000 required to build it. Based on the design of the 800 year old labyrinth in the Chartres Cathedral in France, the Sydney labyrinth will be a thing of great beauty – a significant public artwork in an iconic Sydney park.

Thank you for visiting this site and if you choose to contribute by making a tax-deductible donation, you will be investing in community well-being for generations to come.

May your path be peaceful