The first Labyrinth Festival was held on Sunday 10th September 2017. Several different labyrinths and a children’s maze were painted onto the field beside the main sandstone labyrinth with facilitated walks accompanied by live music. It began with an acknowledgement of country by Biripi Elder, Aunty Ali Golding, followed by a frame drum circle led by Jane Elworthy, then a djembe drum circle led by Jeremy Prangnell and finally a didgeridoo circle led by Haitch.

Desiree DeKlerk painted a Triple Spiral labyrinth, designed by Tony Christie and Sacred Union Labyrinth, designed by Robyn Clayfield and Mark Healy painted onto the field, as well as a 7-circuit Pilgrim Labyrinth in which people were able to select a river stone near the threshold and walk it into the labyrinth then leave their worries behind by placing it somewhere along the painted path. So the Pilgrim Labyrinth emerged slowly over the day as one by one, each pilgrim laid their burden down…

In 2014, Australia’s first sandstone labyrinth was built in Sydney’s Centennial Park with funds donated by an inspired community. Emily Simpson initiated this vision and raised the $500,000 required to build this replica of the 800 year old labyrinth from the Chartres Cathedral in France.

The story of the Centennial Park labyrinth in Sydney began with a passing comment in a transit lounge in Albuquerque, New Mexico in 2009. My friend Lindley Edwards was on her way to meet me in San Francisco, to do a workshop with Jean Houston on the Odyssey, when she bumped into her friend, Mary Ellen Johnson who said, ‘if you’re going to San Francisco, make sure you walk the labyrinth at the Grace Cathedral’.  And so we did and I fell in love with it and the Centennial Park labyrinth is the result. I felt reeled in by its mystery and held by the structure of its winding path. I’d been in an emotional cocoon after a series of losses and leavings, and somehow walking the labyrinth lifted the grief off my shoulders and gave me back a spiritual pulse. When I got back home from San Francisco, I went looking for a labyrinth to walk here in Sydney and realized that there weren’t any.

Centennial Park is a beloved sanctuary of 500 acres in the middle of Sydney. It is the home of Australian Federation and is heritage listed and managed by a Board of Trustees on behalf of the NSW State Government. There had been no major construction in the park for 25 years. To cut a very long story short, I submitted a proposal to the Centennial Parklands Board of Trustees to build a sandstone labyrinth in the park, which they eventually accepted and so the fundraising began.

Most people in Sydney had no idea what a labyrinth was, let alone why they should donate money to build one. So I needed to do some awareness raising. I went to Chartres to do the Veriditas facilitator training course and bought a canvas labyrinth from Robert Ferre’s workshop and started holding public events at the Mosman Art Gallery – a converted church, which was the only space I could find that was big enough to hold a 36 ft labyrinth yet, atmospheric enough to still feel intimate. The walks were usually accompanied by peaceful recorded music, but we also used crystal bowls, and held a ‘Poetry in Motion’ event with actors reciting the sacred poetry of Rumi, Hafiz and Kabir accompanied by a tabla drum, inspiring people as they walked the labyrinth (poems available in sidebar)

A few months later, I was granted permission to paint a labyrinth on the field in the park where the sandstone one would eventually be built. We held many events there, the most memorable being an interfaith walk, just before Christmas, with representatives of the major religious traditions walking their sacred path together.  It was very well received and made the front page of the newspaper.

Its always inspiring when a community gathers around an idea, and that’s exactly what happened with this project. So many people were a part of this journey – from philanthropists, able to give substantial amounts to the group of refugees who, after walking the canvas labyrinth together, insisted on contributing a handful of coins.  People offered support and encouragement in terms of prayers & blessings, and time & effort in helping organize the various fundraising events. The architect, William Zuccon from Dods & Zuccon Architects, donated hundreds of hours of his time to ensure with painstaking precision the exact sacred geometry.

It took just over a year to raise the funds required to build it. The sandstone is heritage grade and usually reserved for government. It represented 65% of the cost (including the stonemason’s labour), the reinforced concrete slab was 15%, with a 10% maintenance fund and 10% GST.

Donations came mostly from individuals, apart from the concrete for the slab which was very generously donated by Boral. There were many miracles along the way – people stepping up to help or introduce me to someone who could.  We were also blessed to have guidance from the elders of the labyrinth community; Lauren Artress, Jeff Saward, John James and Robert Ferre on several important issues including the orientation and various construction details.

The Centennial Park labyrinth was officially opened by the Governor, Dame Marie Bashir on 15th September in front of hundreds of inspired donors and supporters.  We were honoured to have wisdom keepers from 11 different faith traditions present to bless the labyrinth on behalf of their communities (quotes below). They walked in silence, accompanied by music composed specially for the opening ceremony by Australian composer Corrina Bonshek. You can download this beautiful piece of music here.

The great Persian poet Rumi, who happened to live at the same time that the Chartres labyrinth was built said this; “Out beyond ideas of wrong doing and right doing, there lies a field. I will meet you there.”  The labyrinth is just such a field. It is a powerful tool for reconciling differences, reminding us that ultimately, we all walk the same path. It is a rare and precious thing to find a symbol, which is truly universal  – which is able to hold and welcome people of all faiths. At a time when communities are so divided and politicians are beating the drums of war, it was deeply moving for all present to witness the wisdom keepers walking the labyrinth together in peace. As Aunty Ali, the Aboriginal Elder who was the first to set foot on the path that day said, “The labyrinth invites and welcomes people to walk the path together – it calls them to the land in oneness”.

The journey to build the labyrinth required all of me. It stretched my capacities and forced me to dig deep and discover new ones. I was inspired by the labyrinth but also felt compelled – driven by something greater working through me. The psycho-spiritual journey was at least as challenging as the actual journey of fundraising and construction. In many ways the labyrinth was birthing me as well.

The final blessing was that Mary Ellen, whose suggestion started this whole chain of events back in that transit lounge in Albuquerque, flew all the way from Seattle to be at the opening ceremony and complete the lovely circle she began.  Our words are so powerful – you simply never know which ones might change someone’s life… So, the next time you find yourself in a transit lounge somewhere and someone says they’re going to Sydney, tell them to visit the labyrinth in Centennial Park.

Quotes from the Wisdom Keepers: 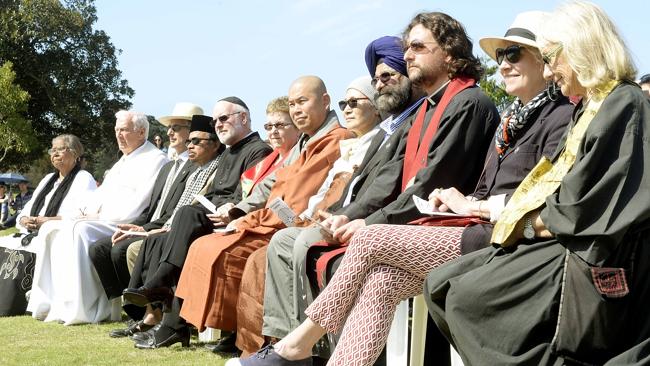 Walking home to country is a connection our people have always had with Mother Earth. Our culture is defined by the closeness of family circles and staying connected to the people within it. The labyrinth invites and welcomes people to walk the path together – it calls them to the land in oneness. (Aunty Ali Golding, Aboriginal Elder, Biripi Nation)

As the wind calls the trees to dance, may this walking reflection invite us to rediscover the genuine rhythm of our human journey.  The pilgrim deep within each of us is aware of an unseen world that shapes us. It calls us to a different tempo that can renew our life. The ancient gospel is a story of such a journey that reveals a new kingdom of love.  May this prayer of the labyrinth lead us gently into a new dance with our one precious life. (Monsignor Tony Doherty, Church of Mary Magdalene)

The labyrinth represents the spiritual journey, inward to our inner selves and the Sacred within, outward to the world held in God’s love and yearning for peace and justice. (Rev Dr Margaret Mayman, Pitt Street Uniting Church)

Meditative prayer connects us with the eternal, singular, conscious being known as ‘God’.  Prayer invites God’s presence to permeate our presence.  Prayer cannot bring water to parched fields, nor mend a broken bridge, but it can water an arid soul and mend a broken heart. Pray as if everything depends on God, but act as if everything depends on you. (Rabbi Jeffrey Kamins, Emanuel Synagogue)

A pilgrimage is a moment when people come from every corner of the world to share the spiritual experience. They come in humility and sincerity to God Almighty. (Imam Amin Hady, Zetland Mosque)

Look at your feet. There is your mind. See where your feet are. You are there. (Venerable Boan Sunim, Korean Puri Temple, Gordon)

Walk as if you are kissing the earth with your feet.  When we are walking with mindfulness, then the walker and that which is walked upon become one, the division between self /other dissolves into the sacredness of walking with a peaceful heart. (Zen Roshi – Subhana Barzaghi, Sydney Zen Centre)

In the journey of faith through life, we are given paths which help us to live more fully within that one journey. In the Christian liturgical tradition, every year is a pilgrimage celebrating the two primary cycles of Advent-Christmas and of Lent-Easter. Among the ways of reflecting and meditating on our journey of faith and our relationship with God and others, are such treasures as the Labyrinth. (Father Martin Davies , St James Church)

Nothing can bar or mar the paths of those who truly believe in the name. They depart from here with honour. They do not lose the proper path. The spirit of those imbued with faith is wedded to the realization of truth. (Jaspal Singh, Sikh Temple,)

One of the first things we find God doing in the Bible is walking in the garden of Eden in the cool of the day (Gen 3.8).  God promises the people: ‘I walk among you and be your God’ (Lev 26.12).  The Bible can pay no greater compliment than to say of some people that they ‘walked with God’ (Gen 5.4).  The apostle Paul describes the Christian life as walking by ‘faith’ not sight (2 Cor 5.7). (Rev Dr Geoff Broughton, Paddington Anglican Church)

For me, prayer is walking. Every step is a prayer. The way unfolds, and all it asks is trust and humility. The road always leads home. Step by step.  (Ailsa Piper, Writer and Pilgrim)